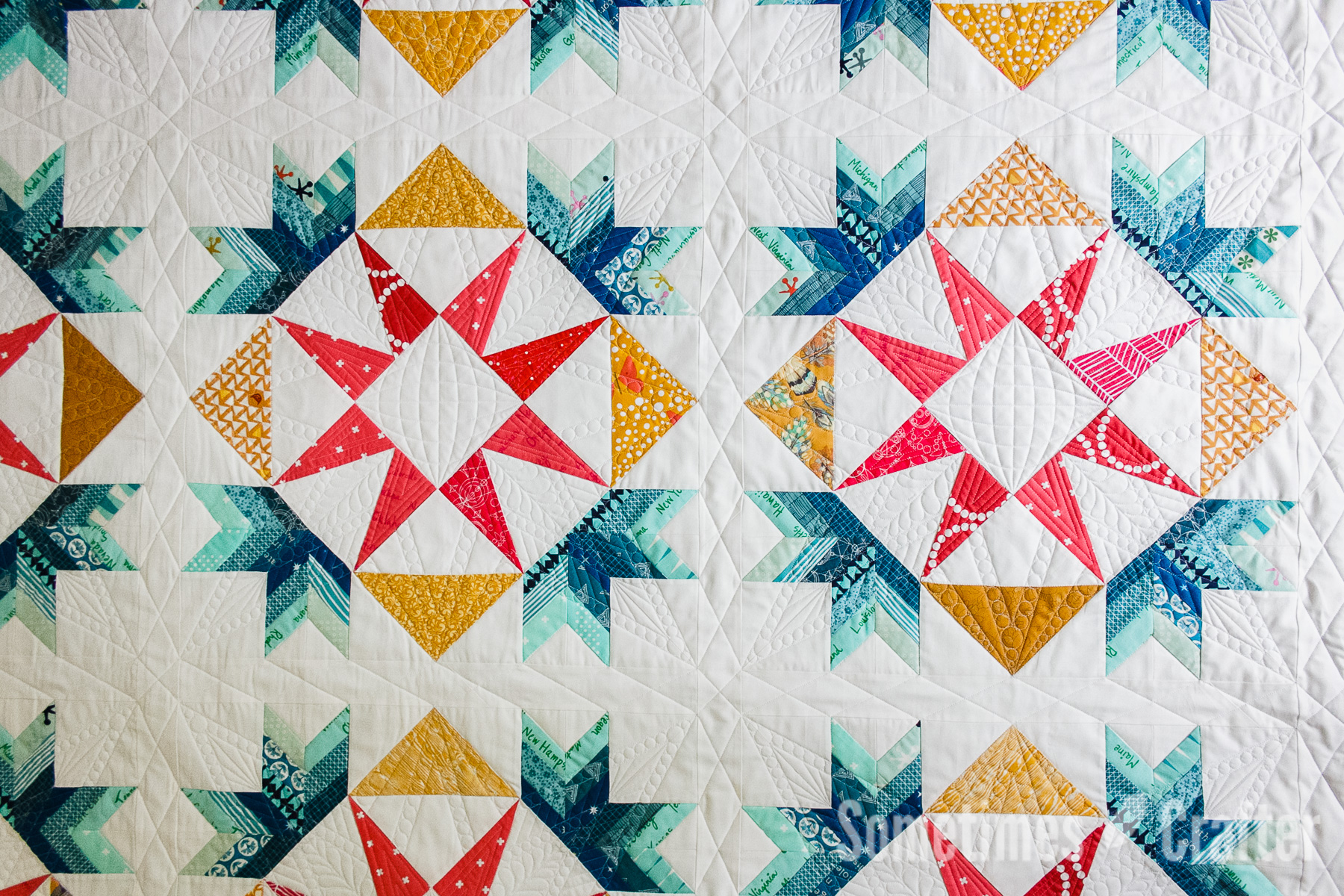 I often forget about quilts I’ve quilted that are meant for publication.  From the time I see it until it’s out there for the world to see is usually at least a year, and often longer.  As is the case with this beautiful quilt.  Rebecca Bryan of Bryan House Quilts contacted me last year to see if I could quilt this for her. It is in the most recent issue of American Patchwork & Quilting that just hit shelves last week and is also the cover quilt.  I knew it was coming up as it was spotted in the wild at Quilt Market, but was still surprised when I was standing in line at the store to pay, and was skimming the shelves, and saw the quilt on the cover and thought to myself: Hey, I know that quilt!  So of course I had to buy the issue. 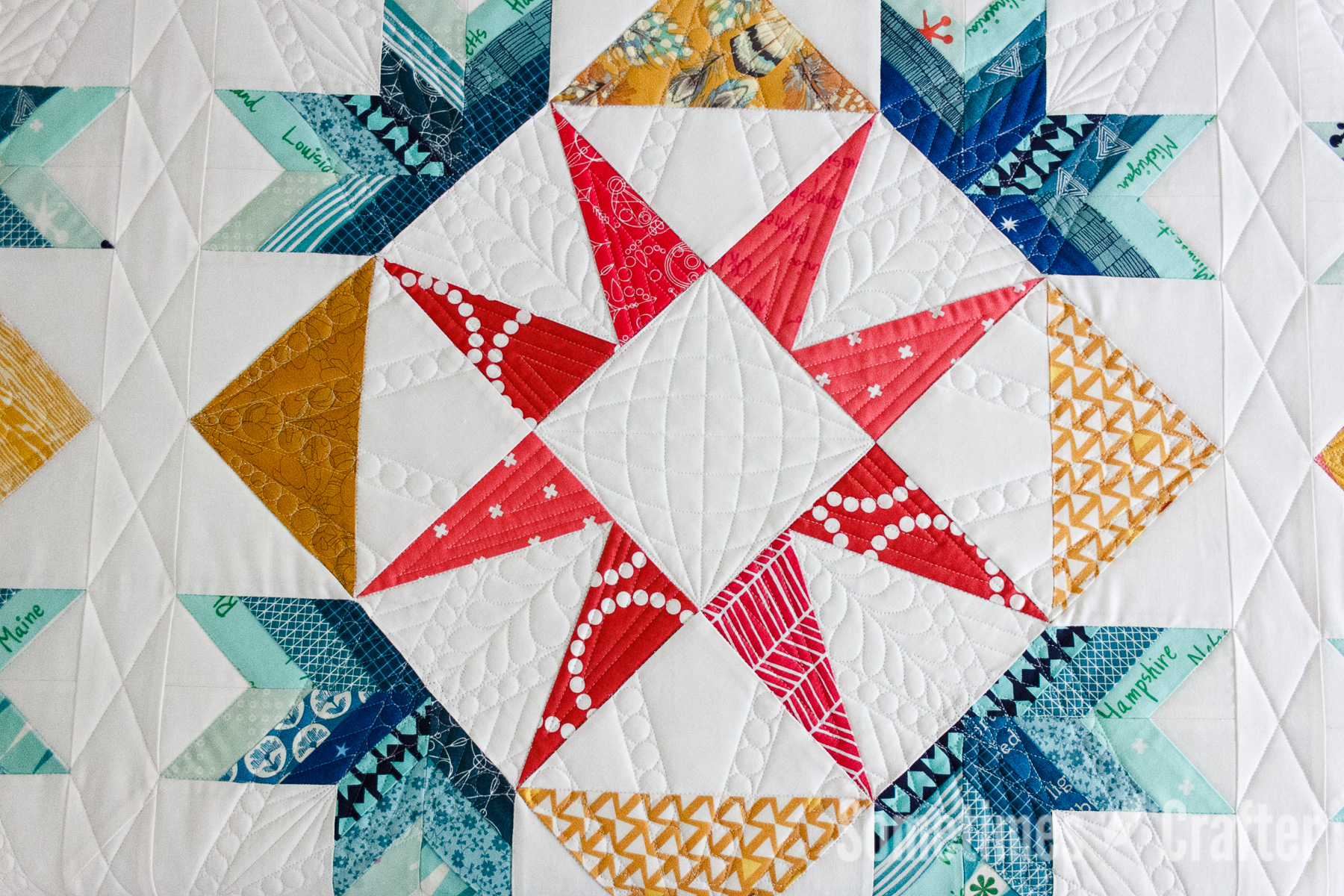 When Rebecca contacted me she knew she wanted to do something custom since it was for publication, so I got to work coming up with ideas.  I wanted to play off the point of the stars and make those stars bigger and with more dimension. 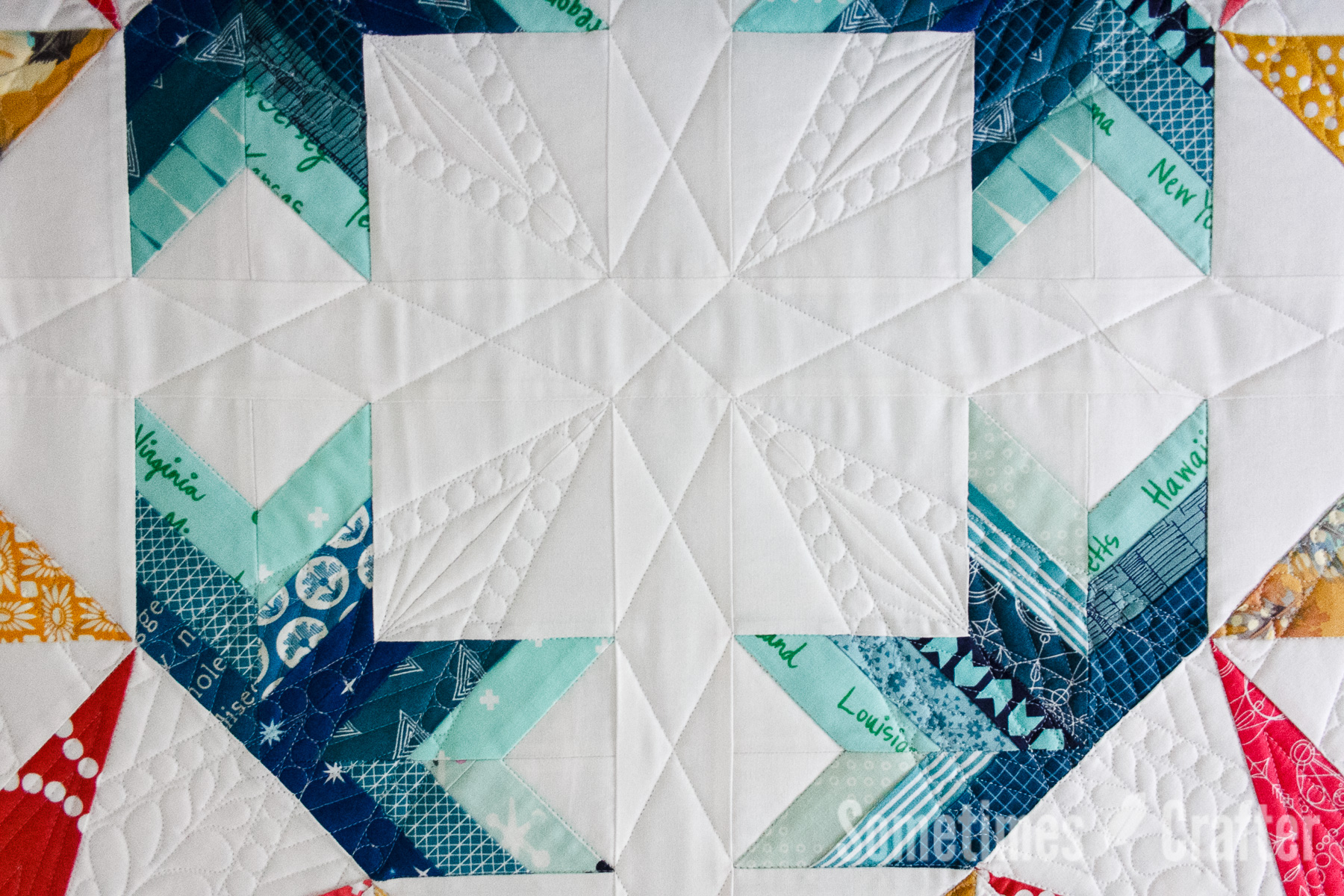 Finding the design to fills those blocks was easiest, but finding something to fill in the borders around the blocks was more of a challenge.  I toyed around with a few ideas, but ultimately Rebecca decided on keeping it simple with zig zagging pattern.  All those points came together with the border to create a very interesting secondary pattern. 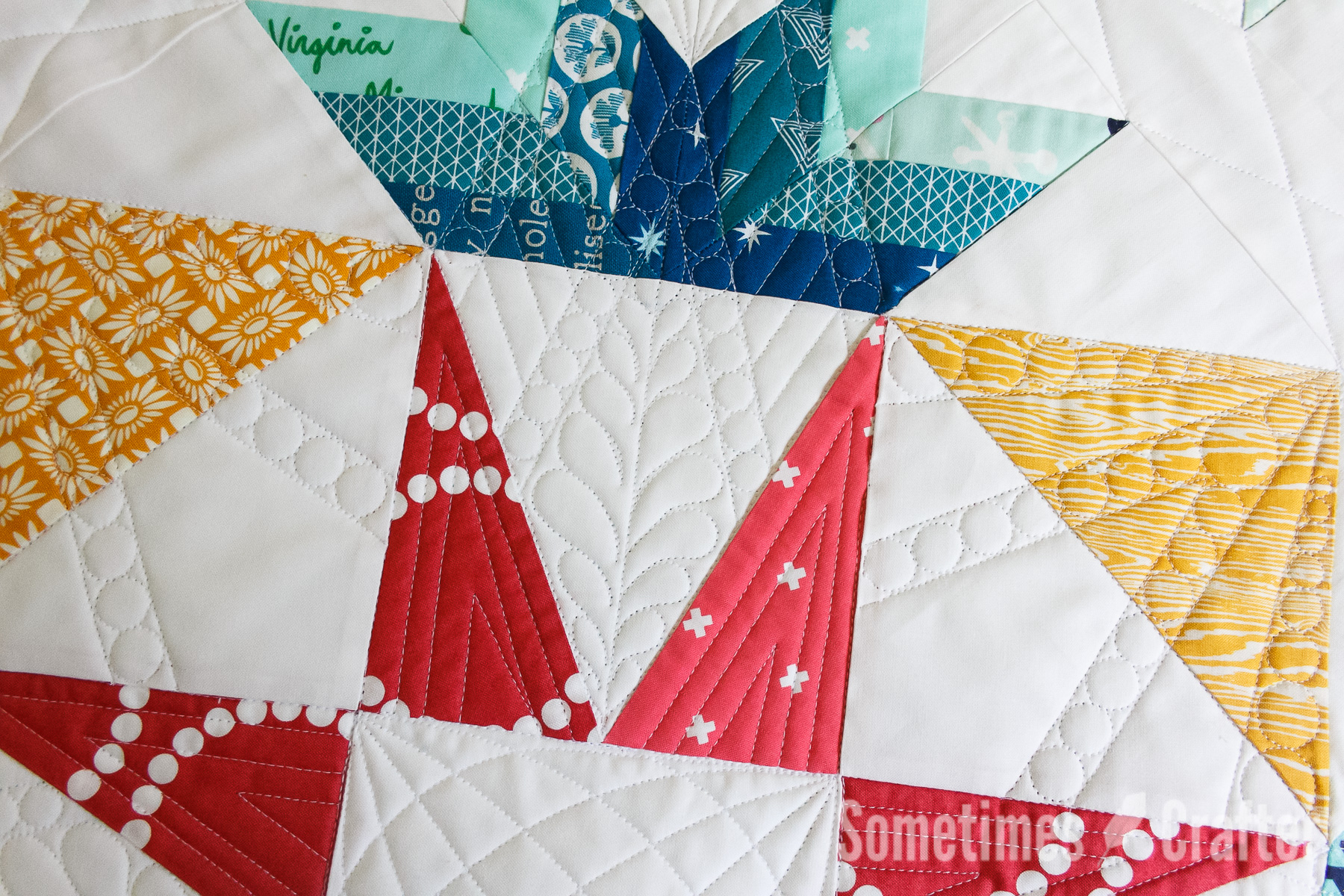 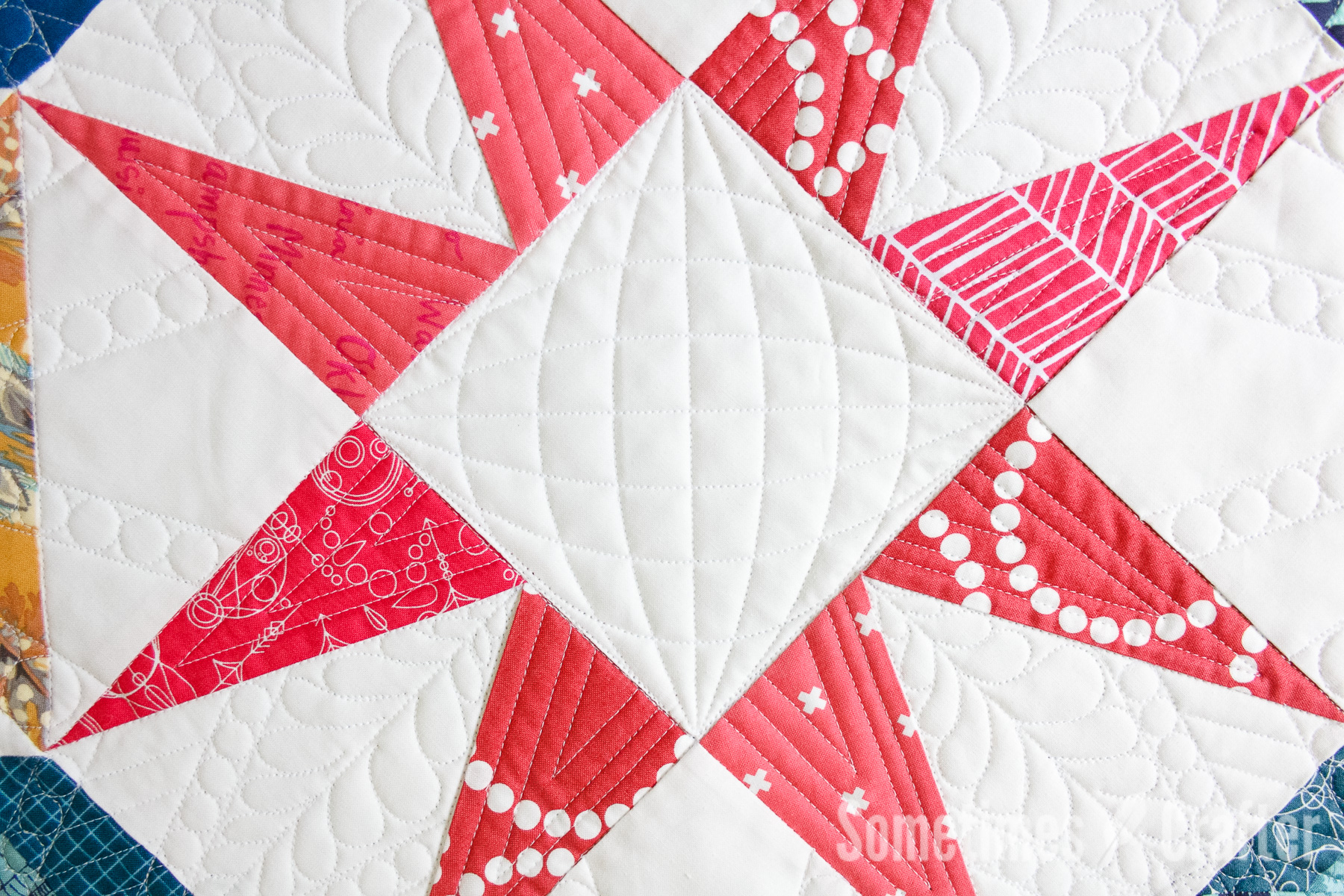 …and a center that was curved. 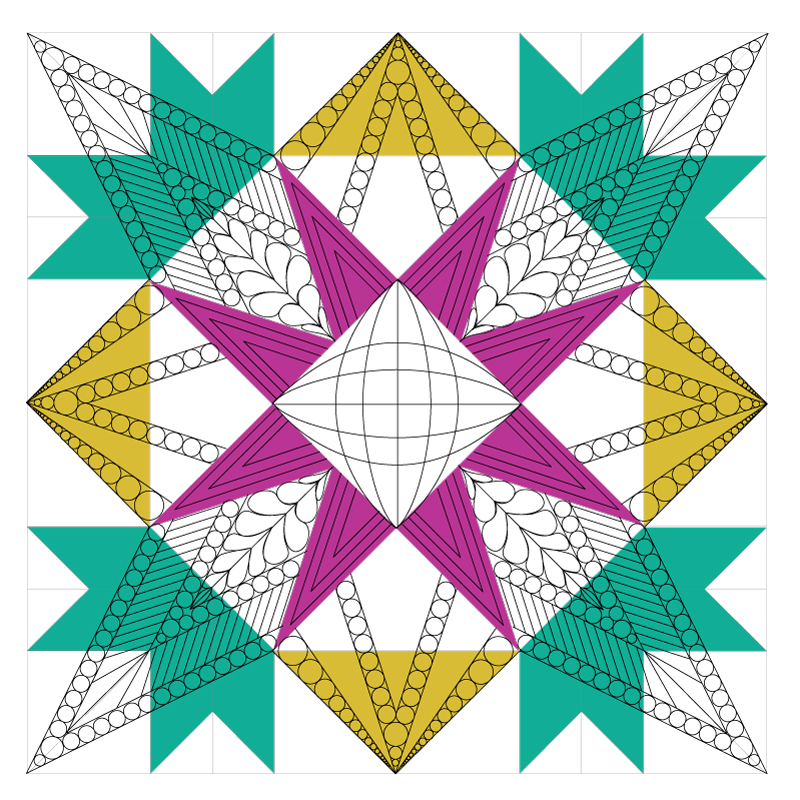 All of this was sketched by hand first, then digitally drawn in Illustrator to make sure I liked how it looked (and then I got Rebecca’s approval), and then I drew each of the design elements in AutoSketch which I am then able to take into Creative Studio which is the program on my computer that runs my longarm.  Some of the elements were done free-motion, like the feathers and the triangles within the star points were done with a ruler, but ultimately I let the computer do the bulk of the work so that the elements could be as uniform and “perfect” as possible. 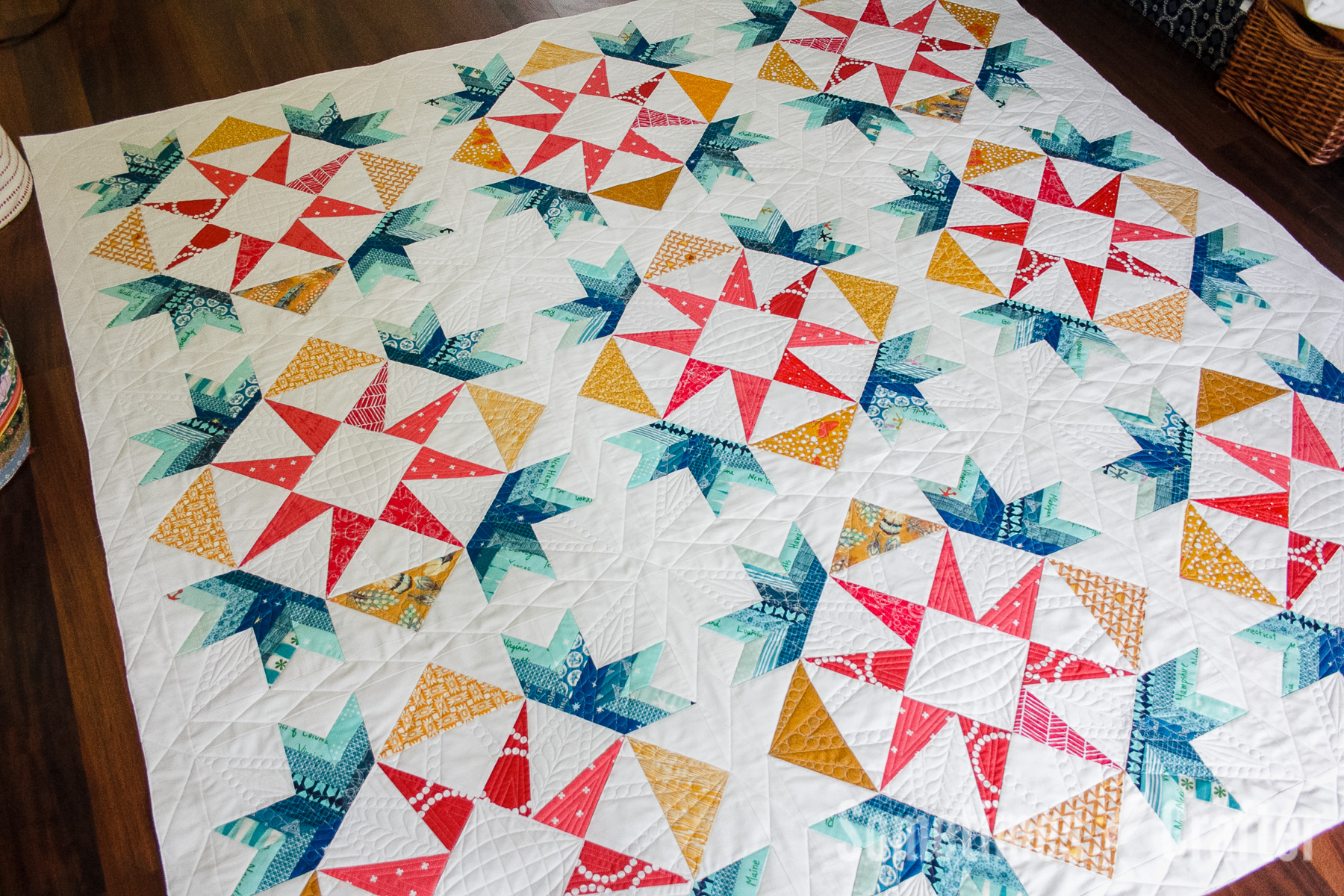 Overall I think this quilt took me about two weeks to quilt (that’s not including design time, just actual quilting time).  Make no mistake, just because I let the computer do the bulk of the quilting doesn’t mean it wasn’t  time intensive.  There’s a lot of set-up and prep to making sure things quilt as they should, where they should, because it is fabric after all, which means lots of movement.  The magazine is on newsstands now, so be sure to pick up a copy and visit Rebecca to read more about her quilt. 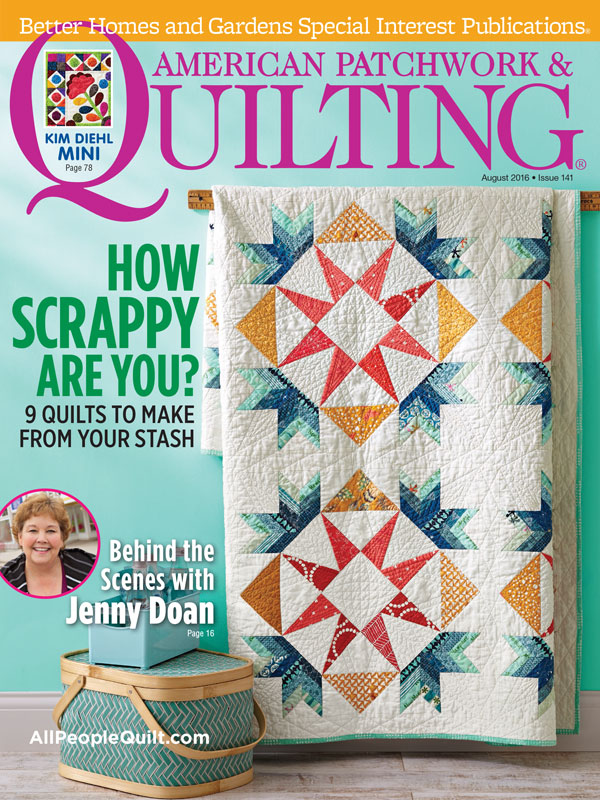 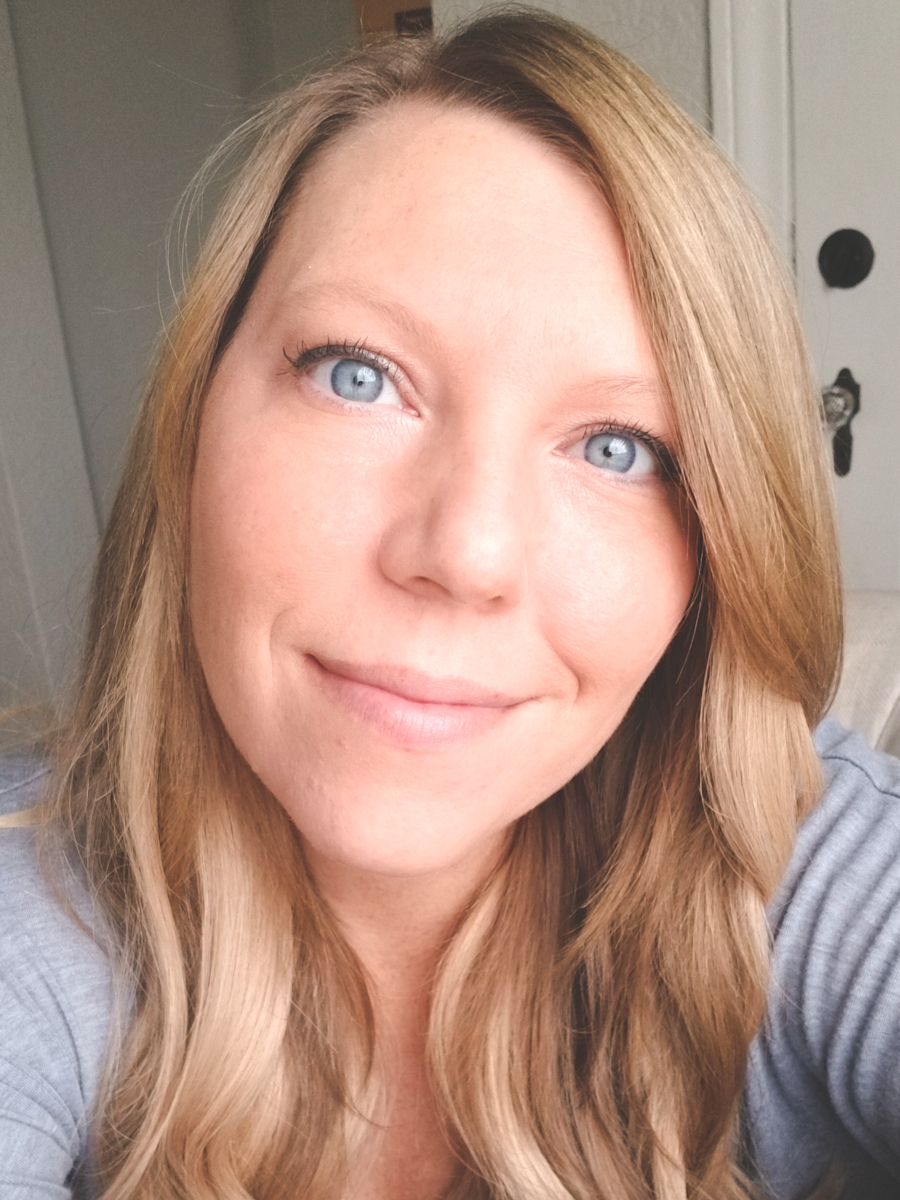 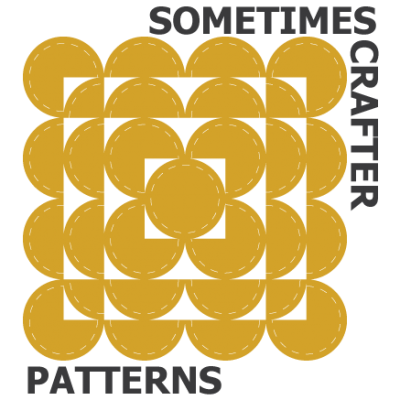 Another helper. It's just gonna be all kitties all

Jojo has decided the seedling box makes a nice bed

An angular wave design with a soft curve to compli

On it's way home to @jenny.l.barrett She asked me

I've been taking illustration classes in my (very

Getting this #lafindumondequilt ready to ship home

We haven't done this in awhile. I love kitty snugg

I drew something. I also made it a gif (swipe over

I think everyone could use some flying Wolfie in t

What a crazy, crazy time. But at least there's eno

Halfway through March and it finally decides to sn

Day 12: Pressing Matters. I think this is the same